Bermuda - in search of the Cahow

As a continuation of the Troubled Waters project, I was invited to Bermuda to do some work on the Bermuda Petrel (Pterodroma cahow), a critically endangered seabird.  Once thought to be extinct it was rediscovered 60 years ago and since then a long-term conservation project has slowly encouraged a growth in the population.  The current research and field effort is led by Jeremy Madeiros (below left) who told me that last season there were 168 breeding pairs.

During my week in Bermuda I had times at sea watching the birds in the late afternoon a few miles offshore as they returned from the open ocean and gathered in readiness for an approach to their nesting burrows as soon as it was safe after dark.  I had times sitting in the grass watching Jeremy process birds extracted from their nesting burrows through specially designed access tubes.  Some of the birds he held briefly before putting them back so I had a chance to grab some sketches of key plumage characteristics of ‘feel’ (and smell) of these fabulous birds. And one evening I was able to sit in the growing darkness as birds came closer and closer sweeping in over their small colony calling as they went.  Ghostly shapes speeding through the feint glow from the Milky Way above.  It was a profoundly dramatic and exciting encounter absolutely full of creative potential. 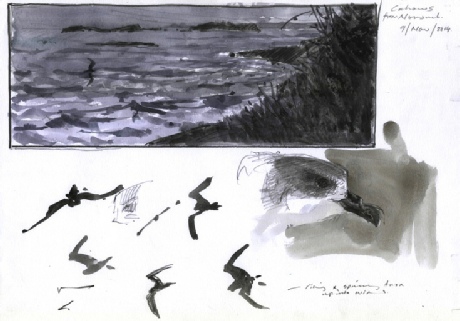 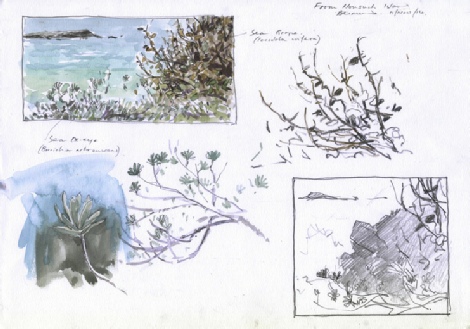 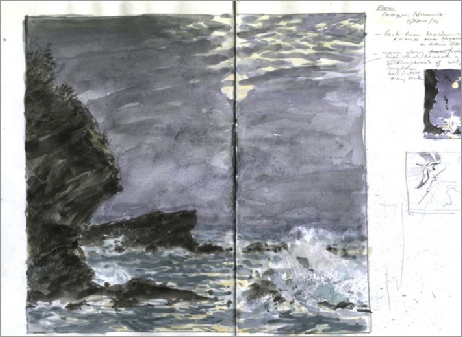 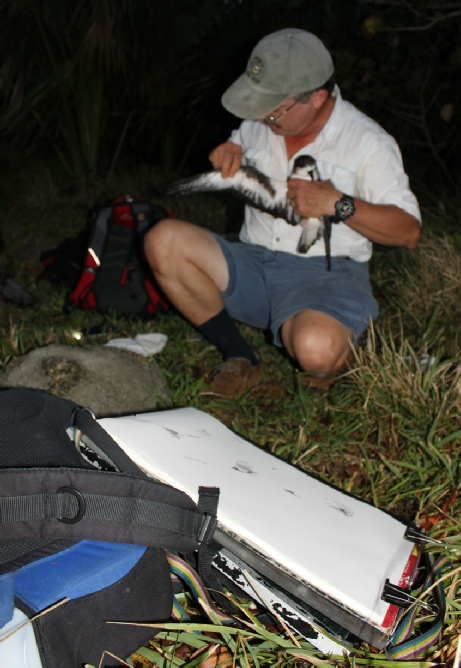 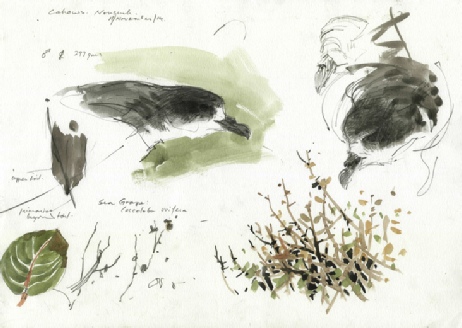 The Bermuda Petrel is also known as the Cahow, named so by the early Spanish seafarers who discovered the islands but never settled because they thought that the eerie nocturnal cries of the birds meant the land was inhabited by devils.  In the early 1500s there were reckoned to be many thousands of Cahows breeding all over the Bermudian islands

The Spanish sailors put pigs ashore to serve as a possible food source for any future passing ships and the animals interfered with the ground-nesting cahow and disrupted their breeding cycle.  It was English sailors en route to the New World in the late 16th and early 17th centuries that settled the islands introducing species like rats and cats and dogs which speedily devoured the burrow nesting birds, their eggs and chicks, and mass killings of the birds for food decimated their numbers.  By 1620 the Cahow was thought to be extinct - and that remained the belief for over 300 years.

But in 1951 when several birds were found breeding on a rocky offshore outcrop.  Since then a team of dedicated conservationists have worked tirelessly to bring this species back from the brink of extinction.  Successful conservation has increased the population but it remains an extremely rare bird.

The Cahow, this is Bermuda's National Bird. It is a pelagic seabird, which means it spends most of its life out on the open ocean where they feed on small squid, fish and shrimps.