As a young lad in the early 1960’s I remember going to see some of the films made by the RSPB film unit.  They were shown in church halls, village meeting rooms and theatres up and down the country by development officers who travelled from RSPB headquarters at The Lodge in Bedfordshire.  They were 16mm reel to reel films projected on screens - Swallows at the Mill was one production I remember catching my imagination; it was in colour which made it more lyrical than some of the black and white films on television at the time.

I remember the television films made by Armand and Michaela Dennis in Africa, the Zoo Quest adventures with David Attenborough which made travel to wild places so romantic, and Peter Scott doing the Look programmes.  All were heroes, but Scott went a bit further because he was also a renowned artist.

I was painting and drawing all the time, but film interested me and I was inspired.  A little later, undertaking a foundation course at Great Yarmouth College of Art and Design and later studying Fine Art at Leicester Polytechnic, I began working with super-8 film and a very early video camera.  The first unsuccessful effort was a very short film about wildlife in churchyards.

Beginning to feel that making a career as a visual artist might be more difficult than hoped I wanting to learn more about wildlife film-making so made contact with the RSPB film unit and volunteered to do anything to help.  Soon after I was sent to help a camera crew in Wales who were working on a film about red kites.  They needed someone to help carry equipment and put them into the nest hides and retrieve them each day, as well as get on with general duties to keep the base camp functioning.

At the end of my time at art school I was very lucky to be offered a full-time job at the RSPB Film Unit as a Trainee Film Production Assistant.  My 18 months there were fantastic as I was given every kind of job.  I stood around in the editing suit handing glue and scissors to the film editor; I drove to the Rank film labs in West London to deliver raw film or retrieve rushes; sometimes I was at the BBC Natural History Unit in Bristol dropping off rough-cut sequences from films we were collaborating on, and I loaded film magazines and cleaned cameras and once had the opportunity to shoot a sequence of birds eating berries.  By now hugely excited by the possibilities that film and photography offered I could see that it might be possible to combine my creative enthusiasm and artistic temperament with a passion for the natural world and find a place working in wildlife film-making.

But then socially I fell in with a gang of scientists, field assistants and adventurers that circled around the British Antarctic Survey nearby in Cambridge.  A short while later one of their number asked if I'd like to travel to South Georgia in the remote South Atlantic to be a field assistant on a seabird research programme he was putting together. - it was an offer and opportunity I couldn't refuse!

Every moment down south I was not required for an assistant’s task I was drawing and sketching, at the same time realising that the potential for making films about penguins, albatrosses, seals and whales was enormous.  So, after the first season, I returned to the UK to borrow money and acquire cameras and lenses, buy film stock, light-meters, changing bags, travel cases and all the necessary kit to make a film in collaboration with Peter Prince the researcher running the seabird programme.  We had made contact already with the BBC Natural History Unit who encouraged us to make the films but offered no commitment upfront but instead showed a great willingness to view the material when we got back and decide then whether there was a film to be made from it all.

Fortunately the material was up to the mark and we had worked to a script so there was a story to be teased from the footage and the hours of sound recordings.  The first film we made The Private Life of the Fur Seal was subsequently shown on BBC1 television as part of the Natural World series..  A second programme telling a more complex Antarctic story, The 150 Million Ton Shrimp was made the following season down south and the finished film shown on BBC2 television two years later in the World About Us series.

Then, after writing and illustrating An Artist on Migration, a book about bird migration with chapters centred in West Africa, part of the story about the seasonal floods in the Sahel was subsequently filmed and shown on BB2 television in the programme Beyond Timbuctu.   Following the perceived success of that and other the programmes I was commissioned by Channel 4 Television to write and present the six part Birdscape series about a range of British landscapes and the lives of some of the birds, and some of the people associated with them.

A  television programme made for the BBC and broadcast in 1992

A day out painting in North Norfolk

Recently posted on You Tube 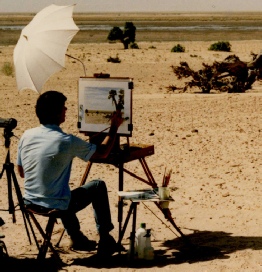 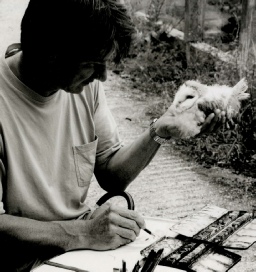